Some more images from my trip to Snettisham in Norfolk. 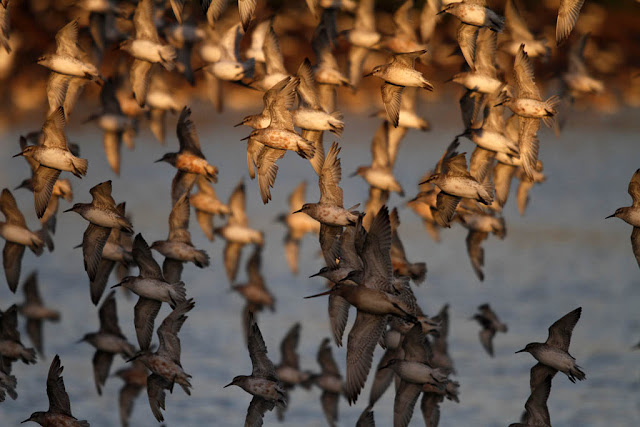 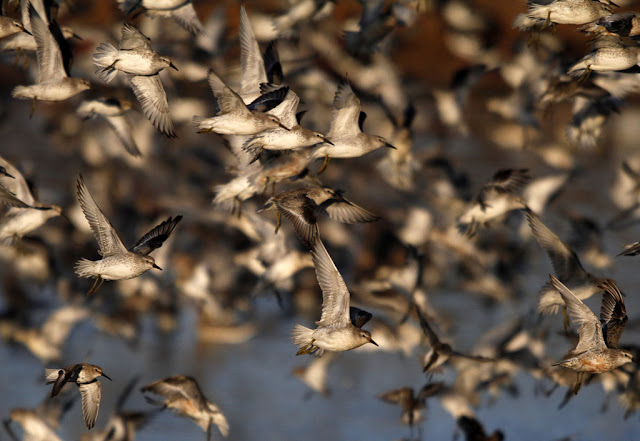 Part of the Oystercatcher roost in the gravel pit. 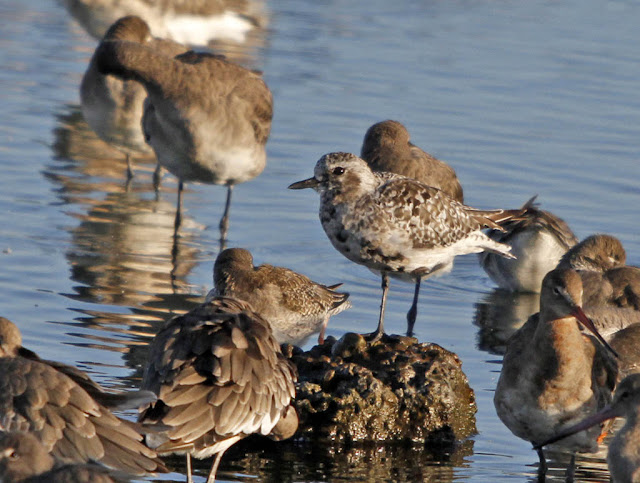 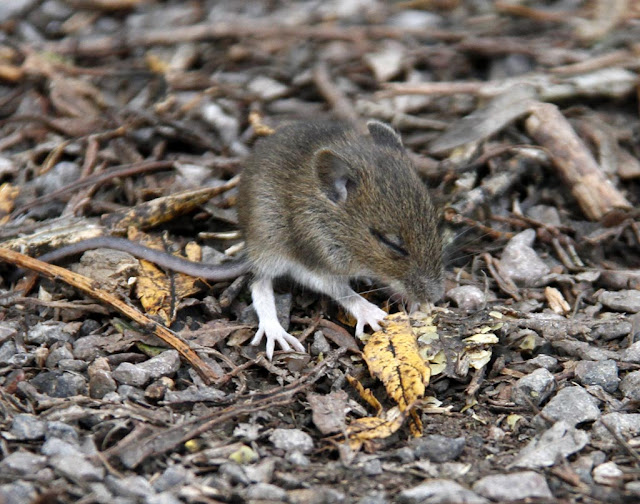 One of two small mice on the cycle track 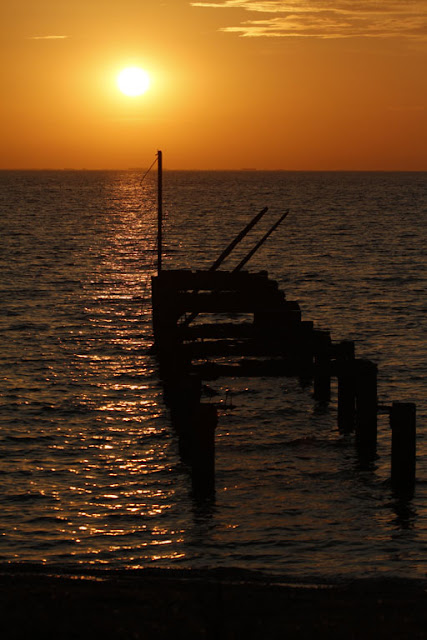 The Wash at sunset
Posted by Paramount at 22:12 No comments:

Norfolk is an area of the country with big skies and big quantities of birds.

On a few days in autumn and spring at Snettisham on the Wash coast the sun and the moon conspire together to produce the highest spring tides that force tens of thousands of waders off the mudflats and on to  lagoons behind the beach that are left over from gravel extraction. Unfortunately the spring tides occur early in the morning and late in the evening restricting the time available for photography. This also explains why in the winter this spectacular exent is not visible. it is dark!

I went there on 16th Sept, the starting date for 5 days of suitable tides. The instructions were to leave the car park at 5.15am for the mile and half walk to the viewing point and hides.

As the tide comes in over the mudflats it pushes the waders together on the ever shrinking areas of mud until eventually they are forced to fly. On the best days they fly around in huge flocks swirling and diving in a similar way to starling flocks.

They settle on the shingle banks in the lagoon clustering closely together and emitting a cacophony of noise.

Within an hour or two they have all left, often in one huge flock, as the tide falls.

The majority of birds are Knot with lesser numbers of Oystercatchers and only a few thousand Godwits.

It is one of the great spectacles of nature in the UK. 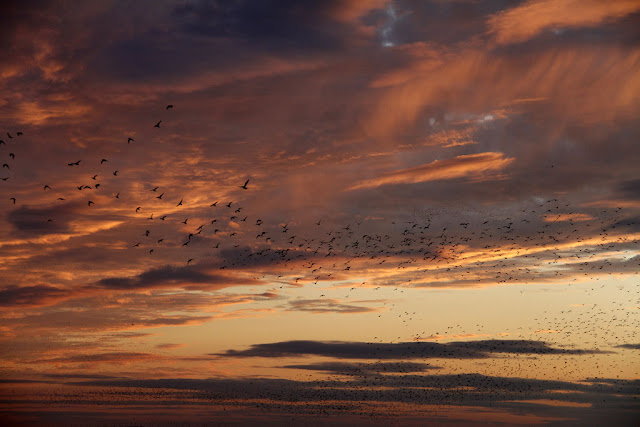 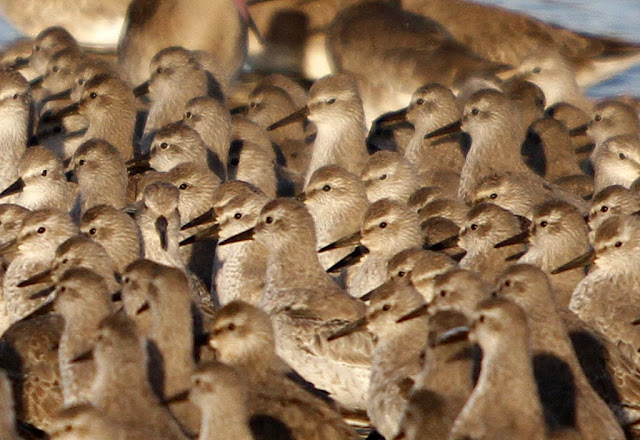 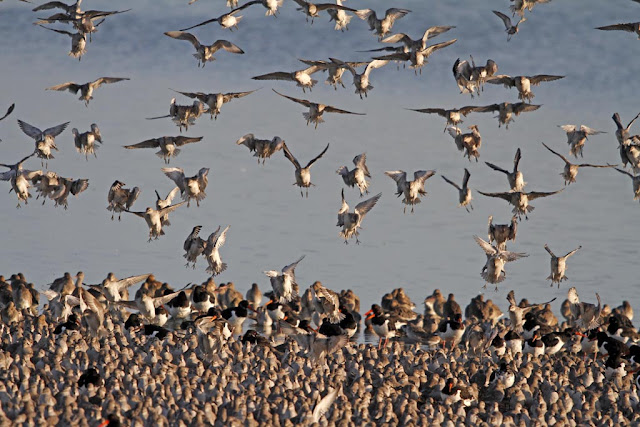 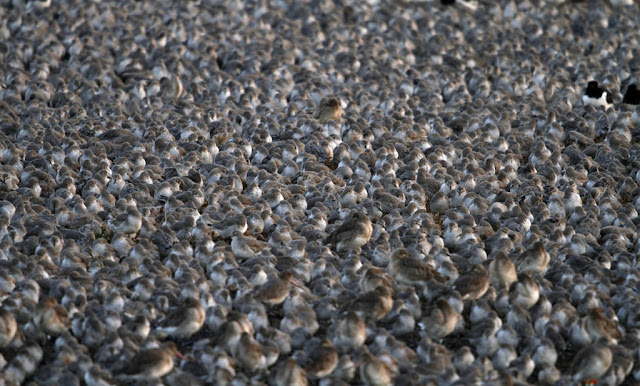 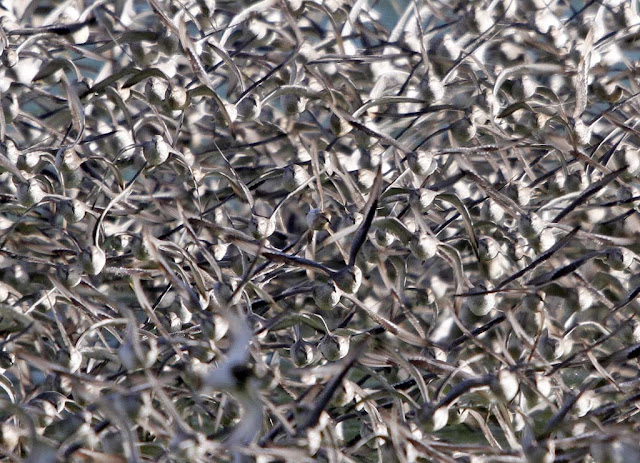 Posted by Paramount at 21:04 No comments:

The Rumps today at 9 am was a miserable place to be but it rapidly got better. Plenty of Gannets passing close to the point and a good passage of Manx Shearwater and Auks further out beyond photographic range. Also a few unidentifed Skuas passed at distance. I must get my eye in for this sea watching lark. Other things to note were two Peregrines, a Hobby, a Kestrel,  some Kittiwakes, Fulmars and a Sunfish.
Then back to Walmsley and in amongst the 10 Dunlin was a juvenile Pectoral Sandpiper. There was a second Pectoral Sandpiper  but it flew off before I could get the camera out. 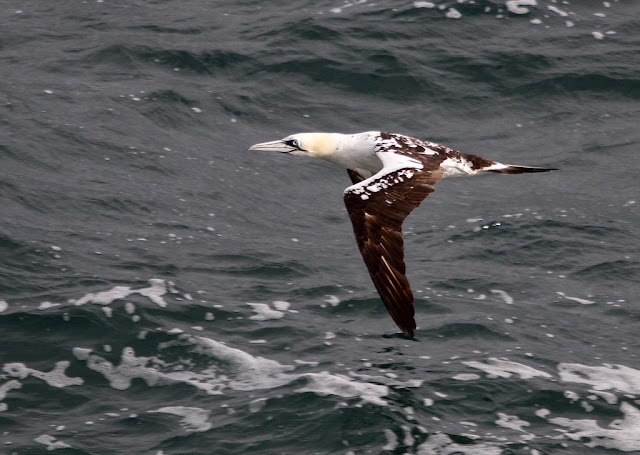 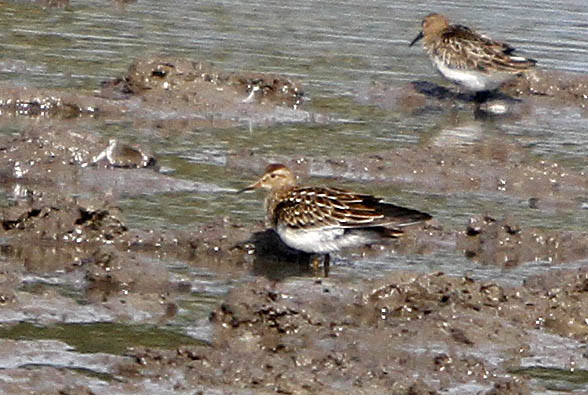 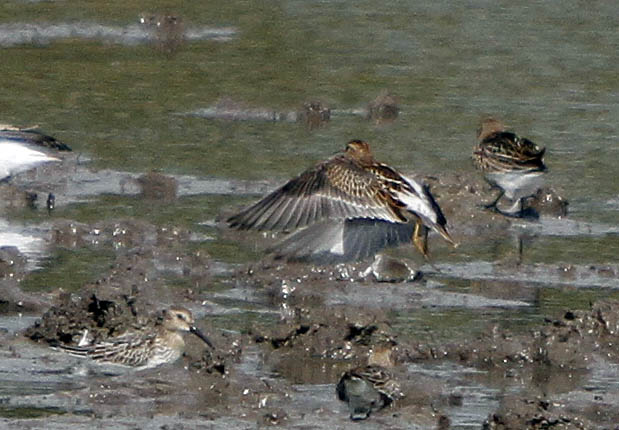 Posted by Paramount at 17:22 No comments: 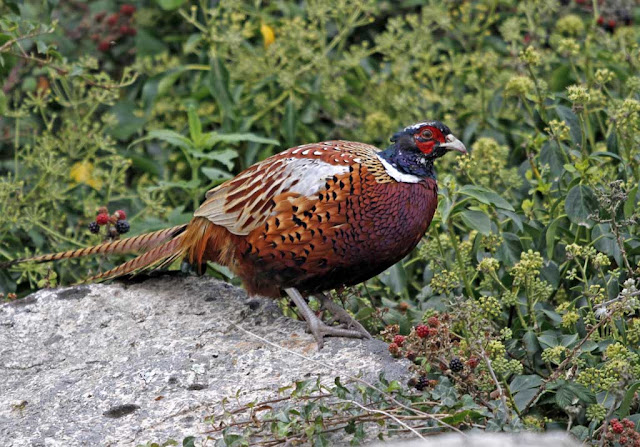 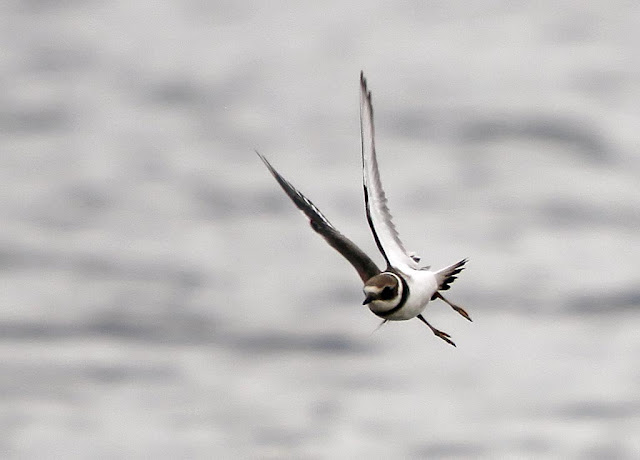 Posted by Paramount at 20:19 No comments:

The area between Polruan and Polperro on the south coast of Cornwall is an underwatched bird area. The scenery is fantastic but it is a difficult corner to get to requiring a drive through small lanes from Lostwithiel or Liskeard and it is not on a through route from anywhere.
Highlights of the day were two pairs of Yellowhammers and some juveniles, Wheatears on migration and large numbers of butterflies including Painted Ladies. 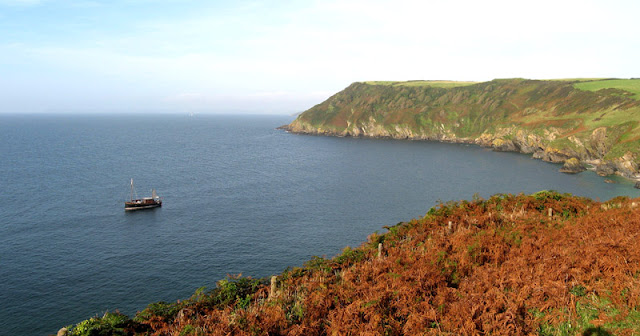 From Pencarrow Head looking across Lantic Bay to Blackbottle Rock 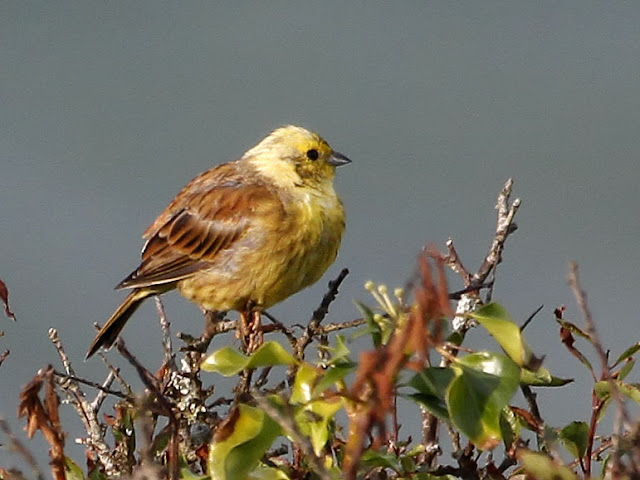 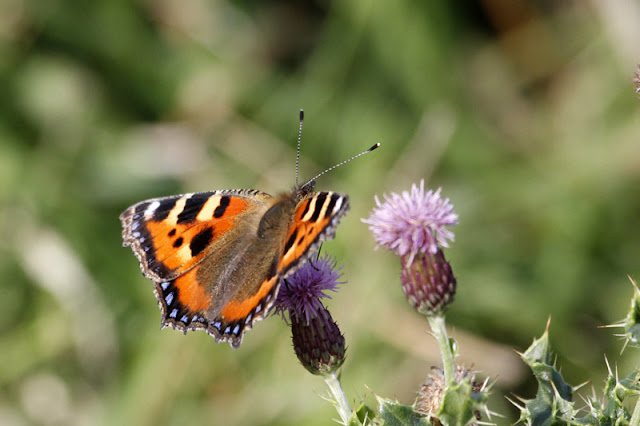 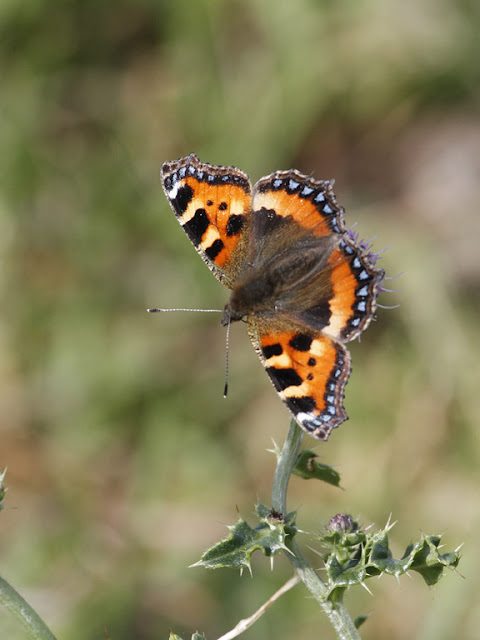 Posted by Paramount at 16:49 No comments:

Birds in unlikely places.These swallows are in Par Market right in the busy entrance thoroughfare. Weaving through the shoppers is no problem for these birds. 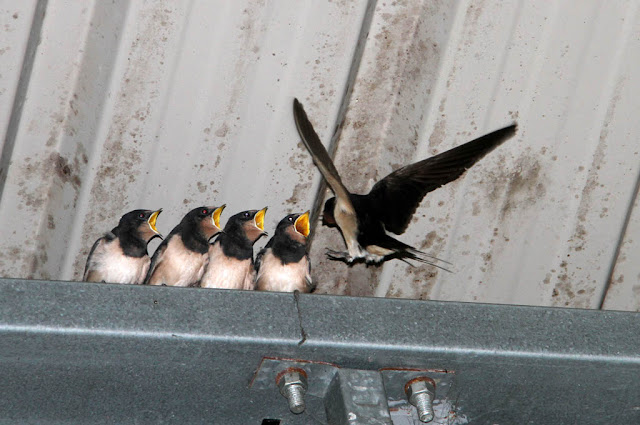 Posted by Paramount at 11:19 No comments:

Marazion on a sunny day. No sign of the Buff-breasted Sandpiper but fnally located one of the Spotted Crakes which put in a very brief appearence skulking on the dark side of a reed bed
. 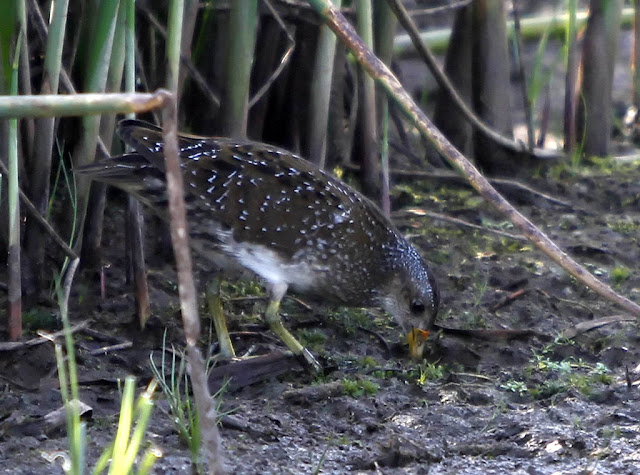 Posted by Paramount at 22:40 No comments: